Recently, two Harvard university researchers proposed that a cigar-shaped astronomical object dubbed “‘Oumuamua” was actually an alien probe ship. Two things need to be said about that theory up front.

And this isn’t a new theory.

The trouble with Oumuamua is that it is a type of astronomical object we’ve never encountered before.

On October 19, 2017, the PAN-STARRS telescope in Hawaii detected a rapidly moving object about a quarter-mile in diameter with a wildly abnormal trajectory. Basically, it was tumbling through space rather than spinning. It’s trajectory made it clear that it wasn’t from around here; it’s believed to be the first interstellar object to pass through the solar system. And it sped up beyond projected expectations when it slingshotted around the Sun and left our neighborhood for good.

The idea that it might be an alien probe was present from the moment it was discovered. When it was first spotted, the comet or asteroid formerly known as C/2017 U1 and A/2017 U1 respectively was described by Professor Alan Fitzsimmons from Queen’s University Belfast as “our first truly identified alien visitor.” Likewise, Dr Edward Bloomer, astronomer at the Royal Observatory Greenwich said, “The exciting thing about this is that this may be essentially a visitor from another star system.” Eric Betz, digital editor for Discover magazine, playfully compared it to the probe from Star Trek IV: The Voyage Home. 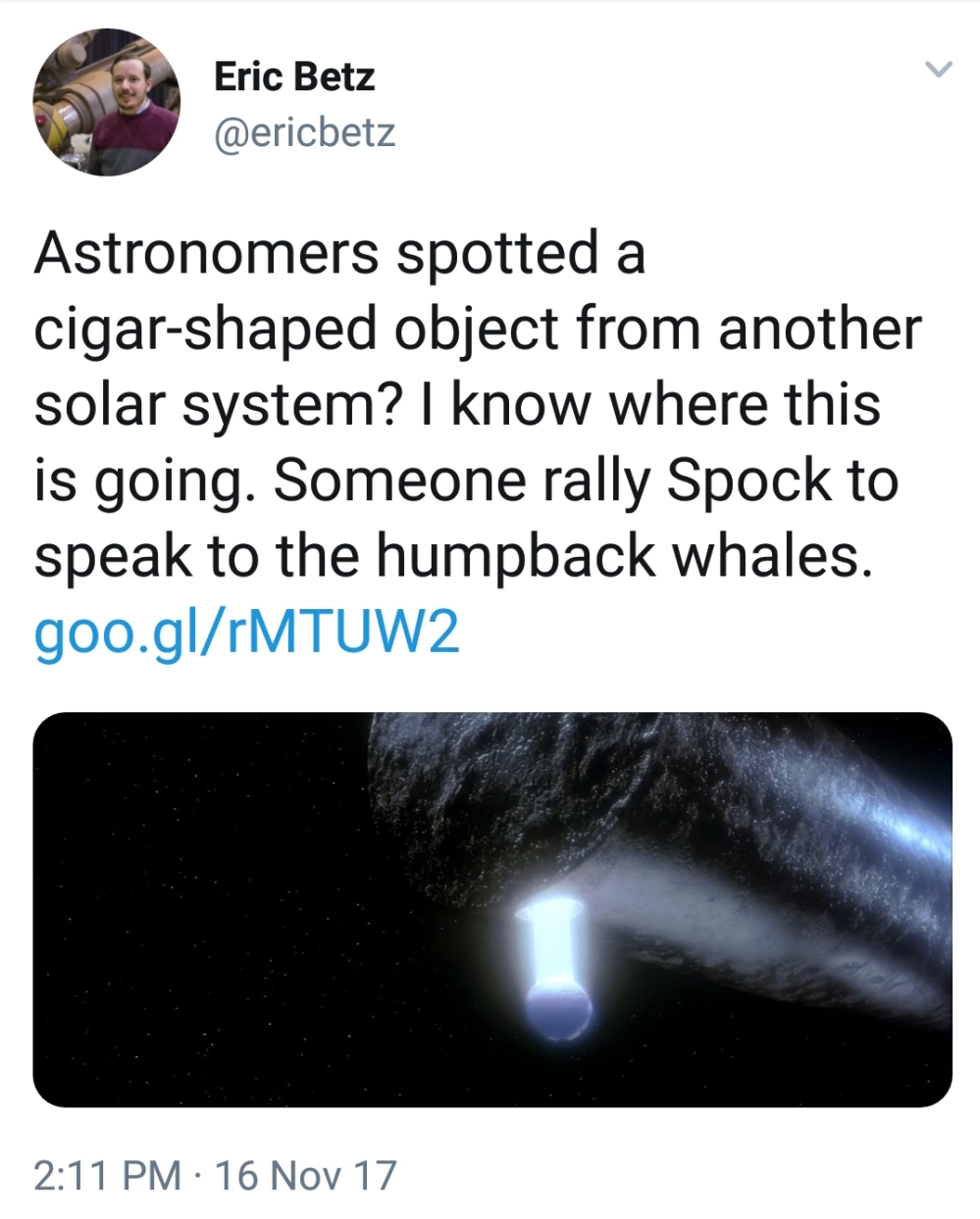 Co-opting the language of extraterrestrial first contact also went into naming the object. ‘Oumuamua means “scout” or more literally “messenger from afar arriving first.” Corey S. Powell, an editor at OMNI and Aeon, was in favor of calling it Rama, after a similar object appearing in Arthur C. Clarke’s 1963 scifi classic, Rendezvous with Rama. 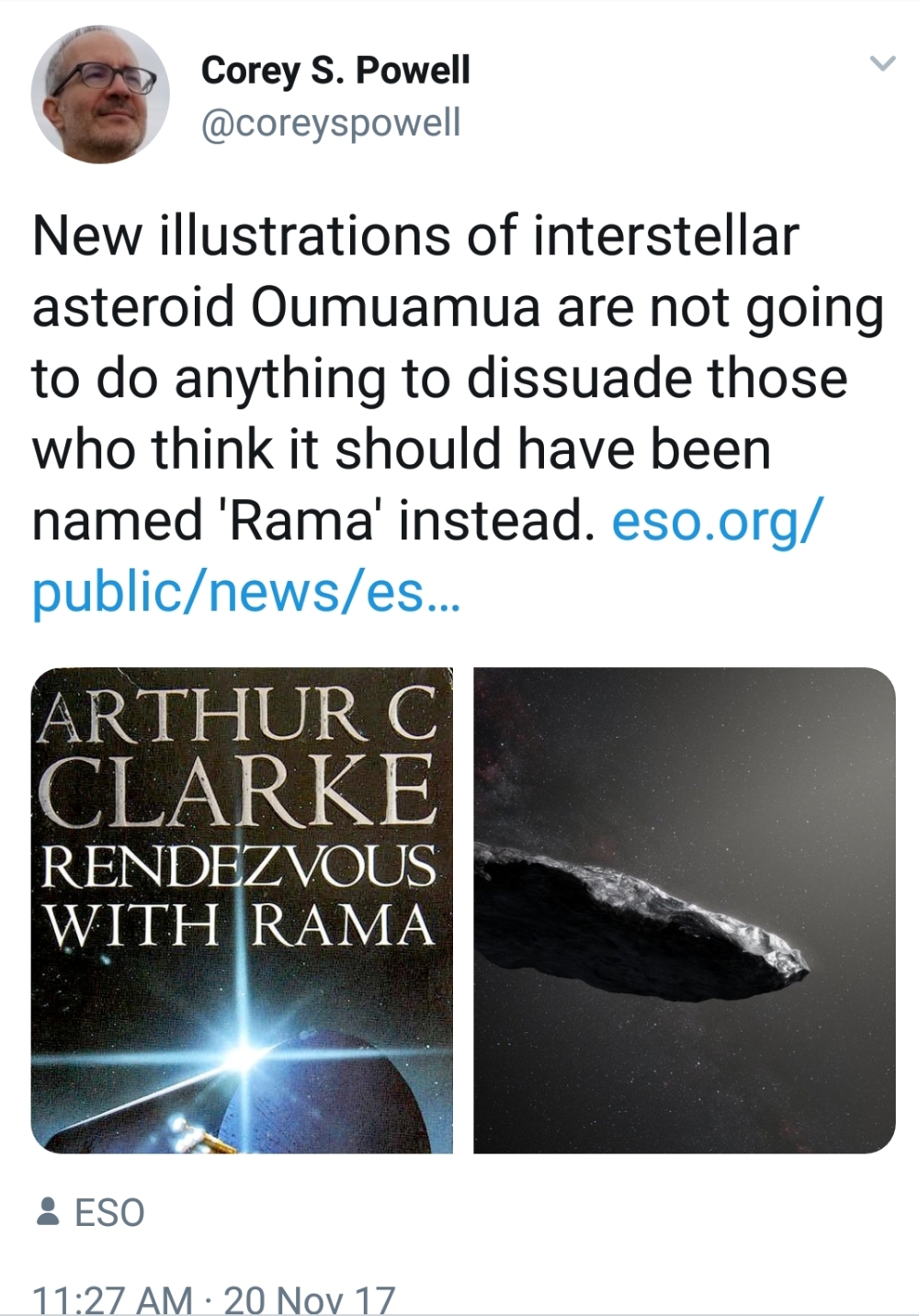 In Clarke’s tale, the alien probe Rama is initially mistaken for an asteroid (categorised as “31/439”) whose speed and trajectory indicate it comes from interstellar space.

All this is to say that it’s important to note that the possibility of an alien probe was seriously, if skeptically, considered. And even partially tested.

On Thursday, December 14, 2017, scientists on the Breakthrough Listen project, an effort funded by billionaire Yuri Milner to discover evidences for alien civilizations, used the Green Bank telescope here in West Virginia to listen for radio signals from ‘Oumuamua, scanning across four different radio transmissions bands. As expected by even the most hopeful, they were met with silence. 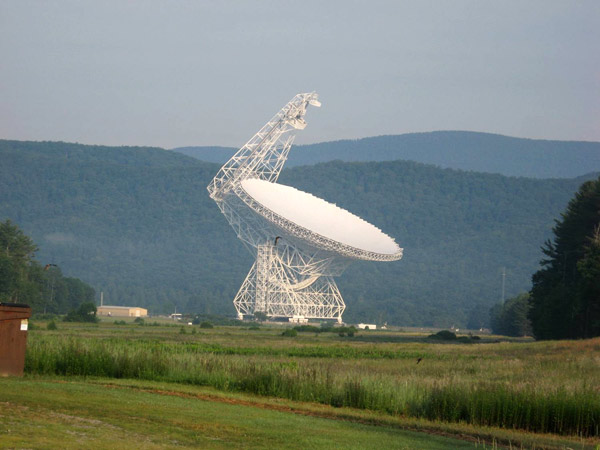 This brings us to the draft of a study posted online almost a year afterward on November 1, 2018, written by two Harvard astronomers, Professor Shmuel Bialy and Department Chair Abraham (Avi) Loeb and published November 12, 2018 for inclusion in the The Astrophysical Journal Letters, Volume 868, Number 1 (20 Sept 2018).
In “Could Solar Radiation Pressure Explain ‘Oumuamua’s Peculiar Acceleration?“, they suggest the possibility that ‘Oumuamua could actually be a device created by an alien civilization.

Their research set out to explain why Oumuamua accelerated as a result of a force other than gravitational pull from nearby objects. Cometary outgassing isthe usual cause of such acceleration; however, many researchers, including the authors of the headline-generating study, found the comet propulsion explanation lacking, as observations indicate the object is not a comet, and may more accurately be described as an asteroid:

“Despite its close Solar approach, ‘Oumuamua shows no signs of any cometary activity, no cometary tail, nor gas emission/absorption lines.”

In their paper, Bialy and Loeb concluded that “the observed non-gravitational acceleration of ‘Oumuamua, may be explained by Solar radiation pressure.” 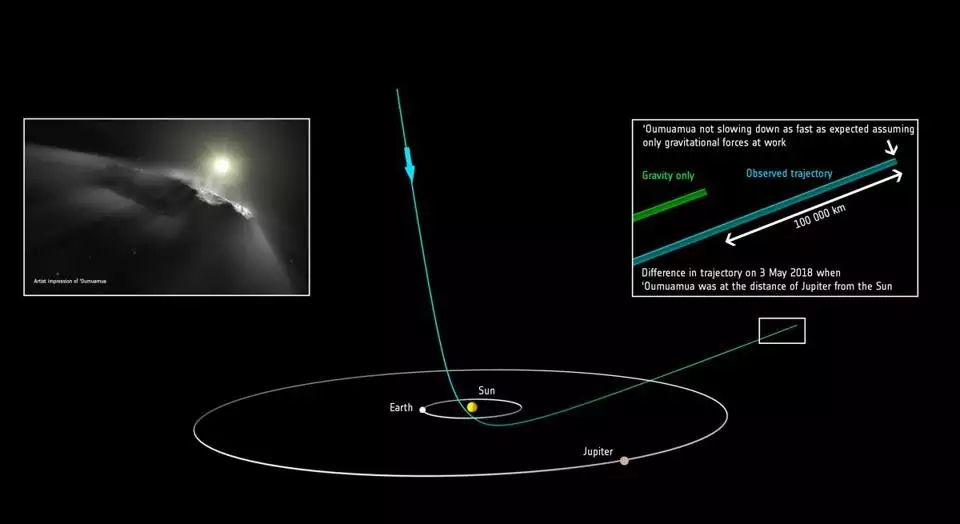 Having answered their paper’s primary question, they asked a new one:

“While our scenario may naturally explains the peculiar acceleration of ‘Oumuamua, it opens up the question what kind of object might have such a small mass-to-area ratio? The observations are not sufficiently sensitive to provide a resolved image of ‘Oumuamua, and one can only speculate on its possible geometry and nature.”

It’s their speculation that generated headlines. 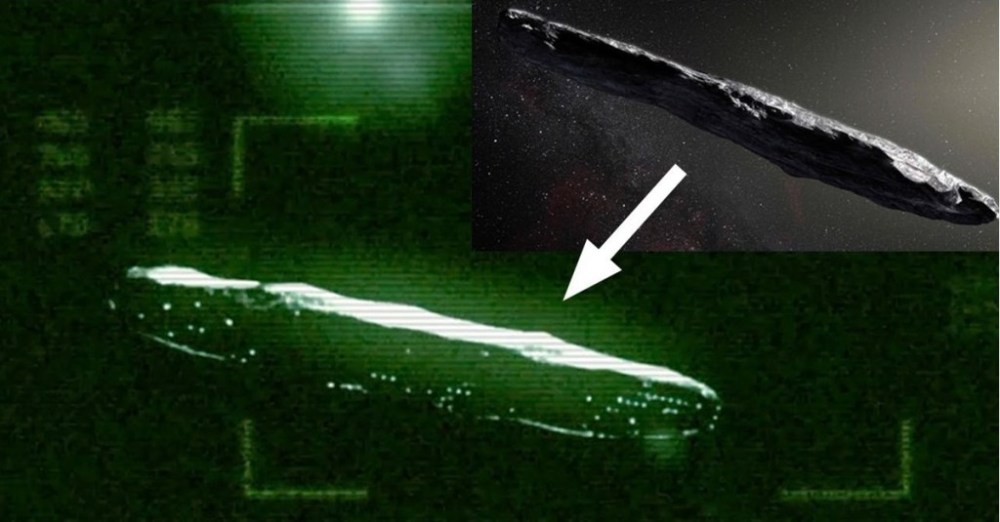 “Considering an artificial origin, one possibility is that ‘Oumuamua is a lightsail, floating in interstellar space as a debris from an advanced technological equipment. Lightsails with similar dimensions have been designed and constructed by our own civilization, including the IKAROS project and the Starshot Initiative.The lightsail technology might be abundantly used for transportation of cargos between planets or between stars. In the former case, dynamical ejection from a planetary System could result in space debris of equipment that is not operational any more, and is floating at the characteristic speed of stars relative to each other in the Solar neighborhood. This would account for the various anomalies of ‘Oumuamua, such as the unusual geometry inferred from its lightcurve, its low thermal emission, suggesting high reflectivity, and its deviation from a Keplerian orbit without any sign of a cometary tail or spin-up torques.”

The authors then suggested another theory:

“Alternatively, a more exotic scenario is that ‘Oumuamua may be a fully operational probe sent intentionally to Earth vicinity by an alien civilization. Based on the PAN-STARRS1 survey characteristics, and assuming natural origins following random trajectories, derived that the interstellar number density of ‘Oumuamua-like objects should be extremely high, ~2 × 1015 pc−3, equivalent to ~1015 ejected planetisimals per star, and a factor of 100 to 108 larger than
predicted by theoretical models. This discrepancy is readily solved if ‘Oumuamua does not follow a random trajectory but is rather a targeted probe. Interestingly, ‘Oumuamua’s entry velocity is found to be extremely close to the velocity of the Local Standard of Rest, in a kinematic region that is occupied by less than 1 to 500 stars.”

The paper’s final conclusion is that:

“A survey for lightsails as technosiganures in the Solar System is warranted, irrespective of whether ‘Oumuamua is one of them.”

It is interesting that when considering the possibility of artificially created extraterrestrial space debris that is no longer functional, Loeb cited himself. Specifically, a blog post he wrote for Scientific American on September 27, 2018 called “How to Search for Dead Cosmic Civilizations.”

In that post, he advocated a new field of study called “space archaeology.” I would prefer the term exoarchaeology, partly because his definition is “the study of relics from past civilizations in space” and by this this he undoubtedly meant relics left by extraterrestrial civilizations.

In any case, after putting forward ‘Oumuamua as a possible candidate for “the first artificial relic” from past civilizations in space, he asks,

“Might ‘Oumuamua have an artificial engine? Even if it happens to be a piece of natural rock as indicated by its lack of radio transmission, this rock appears to be very unusual by many counts. The discovery of ‘Oumumua should motivate us to keep searching for interstellar debris in the solar system.”

Same basic message as the final line of his paper. And then he provides his reasons why he thinks we should do so, and I daresay they likely represent his reasoning for including such extraterrestrial speculation in his paper:

“Finding evidence for space junk of artificial origin would provide an affirmative answer to the age-old question “Are we alone?” This would have a dramatic impact on our culture and add a new cosmic perspective to the significance of human activity. Finding a civilization dead due to war or climate change will hopefully convince us to get our act together and avoid a similar fate. But it would be even more remarkable if radar imaging or flyby photography near an interstellar relic within the solar system would show signs of an advanced technology that our civilization had not mastered as of yet. There is no better lesson to learn than that of civilizations that had developed advanced technologies up to the point of self-destruction.”

Speculation (and motives gor such speculation) aside, this still leaves us with a paper which provided a natural explanation for ‘Oumuamua’s acceleration and subsequent trajectory change. And that means in all likelihood, it was just a neat rock in space.

You may now safely remove your tin foil hats. 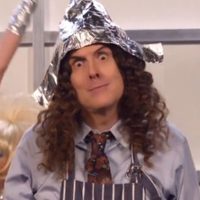