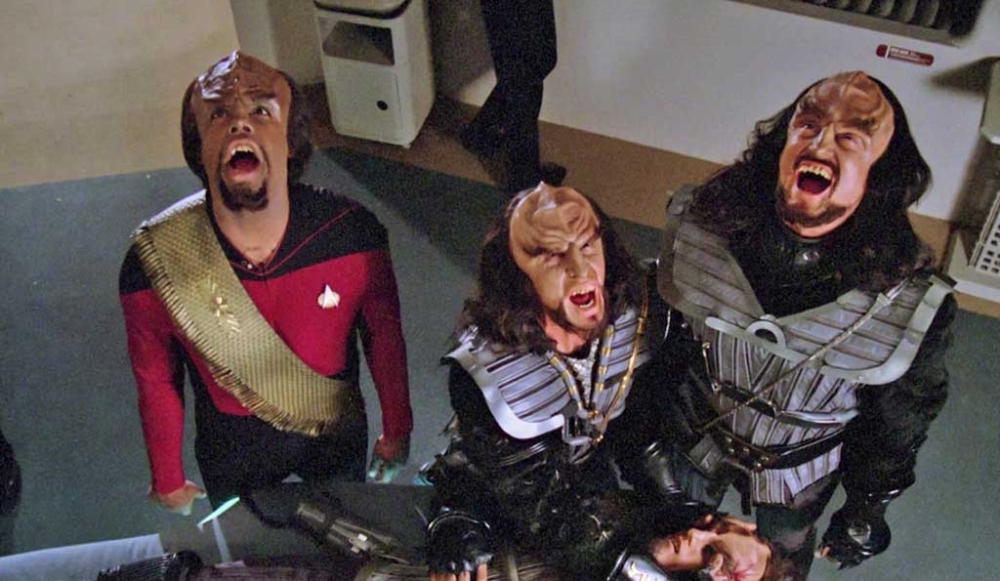 A recent post about Ken Ham‘s repeated use of a bad argument that Isaiah 45:18 says anything about alien life has made rounds. It has also gotten me castigated by those who feel that no one ought to ever question the man (!)

I have no ill will towards Ken Ham. My issue us with the bad logic behind his arguments and how allowing them yo go unanswered can affect the credibility of Christian discourse.

Unfortunately, one of the oft-repeated arguments Ken Ham’s followers used involved his argument that “Jesus came as the God-man, not the God-Klingon.” This is actually an old argument. At least, it was in use when John Weldon and Zola Levitt wrote UFOs: What on Earth is Happening? back in 1975.

Anyway, back in 2014 when Ken Ham was receiving well-deserved backlash for his appeal to consequences argument against aliens  (viz., “Aliens can’t exist because they’d go to hell if they did”), he also used the God-Klingon argument (a fact he reminded us of during a recent Answers News live feed). In an article called “We’ll find a new earth within 20 years,” Ken Ham wrote:

“And I do believe there can’t be other intelligent beings in outer space because of the meaning of the gospel. You see, the Bible makes it clear that Adam’s sin affected the whole universe. This means that any aliens would also be affected by Adam’s sin, but because they are not Adam’s descendants, they can’t have salvation. One day, the whole universe will be judged by fire, and there will be a new heavens and earth. God’s Son stepped into history to be Jesus Christ, the “Godman,” to be our relative, and to be the perfect sacrifice for sin—the Savior of mankind.

Jesus did not become the “GodKlingon” or the “GodMartian”!  Only descendants of Adam can be saved.  God’s Son remains the “Godman” as our Savior.  In fact, the Bible makes it clear that we see the Father through the Son (and we see the Son through His Word).  To suggest that aliens could respond to the gospel is just totally wrong.

An understanding of the gospel makes it clear that salvation through Christ is only for the Adamic race—human beings who are all descendants of Adam.”

[Did he read this off his screen during that live feed? Seems almost word for word. Hmmm.]

Anyway, this is the Kinsman-Redeemer argument against intelligent extraterrestrial life. The Bible makes it clear that Jesus incarnated as the God-man because we needed a Kinsman-Redeemer. That is a doctrinal fact.

You see, if these alien races fell because of Adam’s sin (and not from their own sin or Fall event) then the spiritual effects of the Fall were imputed to them apart from Adam’s bloodline; if this is the case, righteousness can likewise be imputed to them by grace through faith in Christ’s once for all sacrifice. All that would be required is special revelation, not multiple incarnations.

Which means that Jesus would remain the God-man, the Kinsman-Redeemer through whom all who fell through the First Adam find redemption.