I think it’s high time we shot one enduringly false UFO meme down.

I’m pretty sure most people have heard the standard tale of how the term flying saucers came to be. On June 25, 1947, The East Oregonian ran a brief story by Bill Bequette with the heafline “Impossible! Maybe, But Seein’ Is Believin’, Says Flyer.”

PENDLETON, Ore., June 25 (AP)—Kenneth Arnold, with the fire control at Boise and who was flying in southern Washington yesterday afternoon in search of a missing marine plane, stopped here en route to Boise today with an unusual story—which he doesn’t expect people to believe but which he declared was true.

He said he sighted nine saucer-like aircraft flying in formation at 3 p.m. yesterday, extremely bright—as if they were nickel plated—and flying at an immense rate of speed. He estimated they were at an altitude between 9,500 and 10,000 feet and clocked them from Mt. Rainier to Mt. Adams, arriving at the amazing speed of about 1200 miles an hour.

“It seemed impossible,” he said, “but there it is—I must believe my eyes.”

The story was picked up by the Associated Press and spread like wildfire. The very next day, headlines included the word “flying saucer,” though the term never appeared in the original article. That didn’t stop us from falsely blaming Bill Bequette for a time.

In a 1950 interview with Edward R Murrow, Arnold provided the origins of the term flying saucer that is generally accepted today:

MURROW: Here’s how the name “flying saucer” was born.

MURROW: That was an historic misquote. While Mr. Arnold’s original explanation has been forgotten, the term “flying saucer” has become a household word.

So basically editors or whoever else came up with the newspaper headlines the day after the story broke were to blame. And then the public ran with it. The following excerpt from a June 15, 2014 article by Megan Garber for The Atlantic provides a good summary of the prevailing view:

“What is clear, in retrospect, is that, starting on June 26, the flying saucer—as an idea, if not an object—was introduced to Americans. Newspapers began using the terms “flying saucer” and “flying disk” (occasionally: “flying disc”) to describe the objects Arnold had seen. And the concept spread; once the idea had been planted in people’s minds, they, too, began seeing saucers. Or, perhaps: “seeing” them.”

The undeniable fact is that though Kenneth Arnold’s “saucers” weren’t technically saucer-shaped, people began seeing saucer-shaped UFOs in the sky thereafter. Arnold described his UFOs as “flat like a pie-pan and somewhat bat-shaped.” In other words, as he stated in a surviving recorded radio interview from June 25, 1946, Arnold described them as looking “something like a pie plate that was cut in half with a sort of a convex triangle in the rear.” 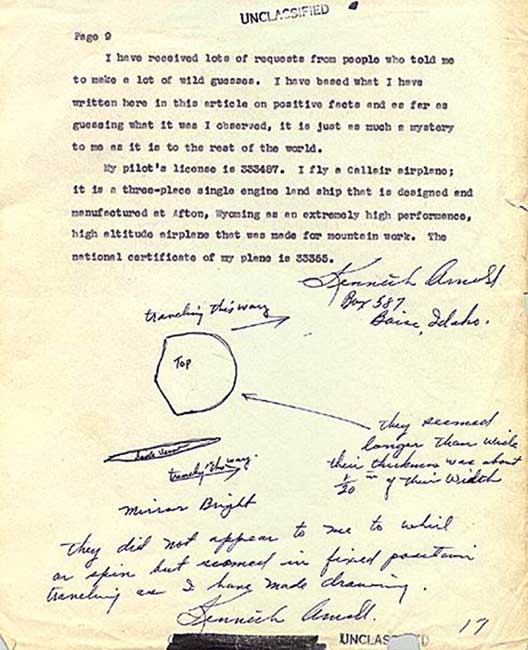 This is a significant fact because it suggests that flying saucers as a completely round saucer-shaped object is a psychosocial phenomenon. After all, why would alien aircraft [or whatever] change their shape just to conform to expectations derived from newspaper headlines?

What people don’t generally realize is that the term “flying disc” was used in headlines the very same day “flying saucer” made its debut, and the slightly different term “flying disk” appeared the following day. This is noteworthy because a “disc” isn’t mentioned in the original article at all.

So where did it come from? Was it just a more generic description of saucer? Or did the people who created the headlines have something else in mind when they conjured these terms?

A lot of sources repeat the Wikipedia claim that “the first recorded use of the term ‘flying saucer’ for an unidentified flying object was to describe a probable meteor that fell over Texas and Oklahoma on June 17, 1930.”

That’s not even a little bit right. Wikipedia cites this line of the news story to back up its claim:

“Some who saw the weird light described it as a huge comet, a flaming flying saucer, a great red glow, a ball of fire.”

It is not generally mentioned, but the terms “flying saucer” and “flying disc (or disk)” were already in use before the Kenneth Arnold sighting. In 1880, an American inventor named George Ligowski from Cincinnati, Ohio, invented a better version of a clay pigeon used in sport shooting after watching kids skim clamshells across a lake. The sustained flight characteristics of the discs seemed to suit his purpose. After a bit of experimenting, he came up with a disc-shaped target made from an amalgam of easily-reproducible baked silt and tar that would shatter when hit, making it evident that the shooter had hit the target. He then invented the spring-loaded catapult called a trap to launch it. Beginning in the late 1890s, as his invention and the sport trap shooting began growing in popularity, his clay pigeons began showing up in newspapers as “flying saucers” and “flying discs.” 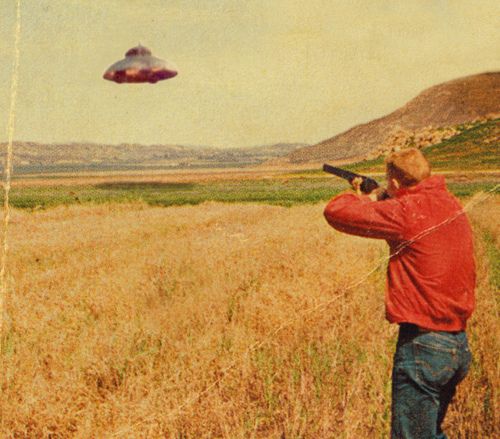 In fact, the first sentence of a May 5, 1944 article in The Call (Schuylkill Haven, PA) about military uses of trapshooting (“Trapshooting a Training ‘Must'”) reads:

“Flying Saucers are knocking Axis airplanes out of the sky.”

Taken in the context of just three years after, that sentence has an entirely different meaning!

In any case, there was a reason why the public so readily appropriated the term flying saucers or flying discs to mean an object of the round flattened shape we associate UFOs with. We already had something very much like that by that very name flying through the air. In fact, the public’s familiarity with the shape of the trapshooting flying saucer likely explains why people began seeing UFOs in that shape after the Kenneth Arnold sighting rather than craft of the shape he described. The headlines and their experience with the term “flying saucers” and “flying disc” created an expectation through which the public filtered their observations.

To put it another way, the concept of the flying saucer wasn’t born in late June of 1947; it was simply transformed into something larger than life.